How to make a slugify function from scratch in JavaScript

Now that we solved the elf coffee shop menu, they are looking into getting an API!

You can find the original problem statement here.

Luckily for us, the hard work is already done. We just need to format the output.

We get where we ended in the previous challenge.

Thinking about the solution permalink

As you see in the desired output, we can simply return the drink, flavor, and price as we already have them.

The name should be a mix between the drink and flavor. However, if the flavor is undefined, we should not show it.

And the slug is the tricky part! This should be lowercase, hyphened, non-special character version of the name.

Thinking out loop, REGEX! And yes, I suck at Regex 😂 But not letting this get to me, here is my solution

I planned to use the map method again. This is a perfect method to return a modified format of an original array.

Let's put it to the test and do the basics:

There we go. This should set the basic desired output. However, we need to work on the name and slug now!

Let's start with the name, as it will be the basis for the slug.

I decided to use template literals to bind the two strings.

You can see we start with the flavor, and if it's not undefined, we return it. Else we show an empty string. Then we follow with a space.

That space is why we need the trim function. It will trim the beginning and end of the strings spaces.

Now let's pass this to the slugify function as well.

We can start working on the slug function, which is quite the hard one.

Note: I'm pretty sure there is a better regex to do certain of these things at once, but this is my approach.

(Do let me know what would work better)

The slugify function takes a text. I've actually added a more challenging text to my one, just to test all the use-cases described.

This string might not be the use case, but it's a fail-safe! We introduce a dash in the beginning and some special chars.

The rules we want to apply:

Ok, quite the ruleset, but let's get cracking.

First the lowercase, this is a easy one:

Then we need to replace all the special chars like é and stuff. This was hard, and I had to use the StackOverflow example on this.

What happens here is that the normalized function will actually extract the special chars from the letter, so it becomes e´ for instance. And then the replace says to remove all Unicode special chars and replace them with nothing.

Note: If you run normalize alone, you won't see the difference as your output will still render the particular letter.

Then we want to replace all non-alphanumeric characters with a dash. I've chosen the following Regex for this.

You can see the dot, and the spaces got replaced with dashes. But this brings two dashes where the dot was.

We want to find any consecutive hyphens and replace them with just one.

This line says to match the - character and find any consecutive occurrence that's at least two in a row.

The last part we want to address is the leading and trailing dashes.

We can again use a regex for this, to remove the leading one we can use this regex:

The ^ character defines the beginning of the line, followed by the character it should match.

And for the last character we can use this one:

The $ sign matches the end of the string, making sure we remove the last dash.

And that's it, we now have a fully working slugify function!

Running the test to make sure they succeed: 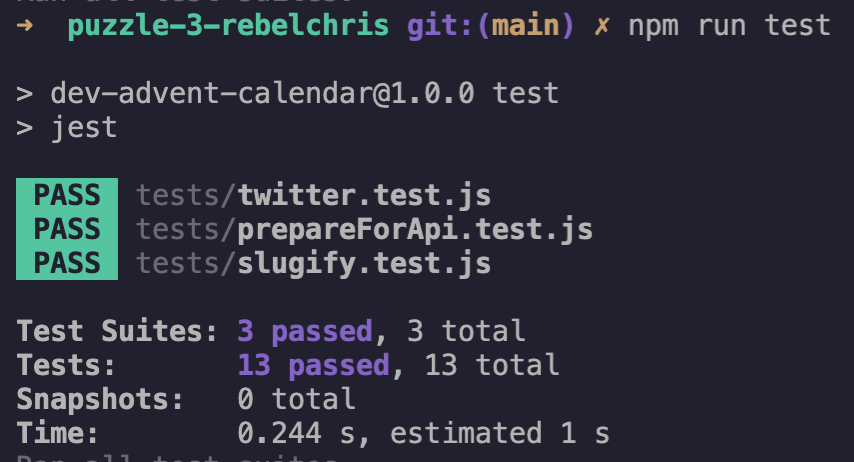 Looking forward to hearing your thoughts on this approach!